Lord, what fools these mortals be!

A Midsummer Night’s Dream was written about 1596. It’s one of Shakespeare’s most popular plays. The play is diffrent than other William’s works. This play is about ideas and emotions rather than plot. It’s full of madness, all supernatural creatures appear in our world and do things human can’t do. Events take place in wood, at night, under the moonlight, which makes them even more mysterious. 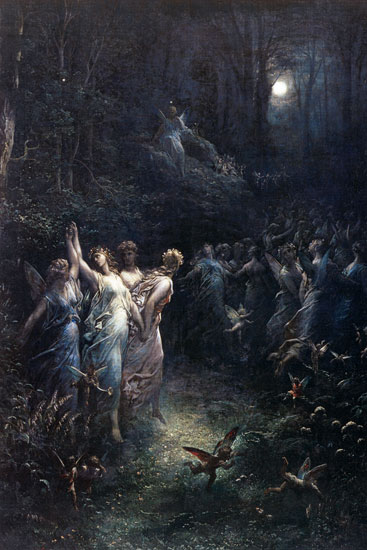 A Midsummer Night’s Dream shows us that even if we say that we’re ‘rational’ there are facts in our lives which are beyond control, things we cannot explain. Feelings, especially love, are strange but we don’t have to clear them up.

Hermia refuses to follow her father Egeus’s instructions to marry Demetrius. Egeus explains Athenian law that says a daughter must marry the suitor chosen by her father, or else face death. Theseus offers her another choice: life with Diana the goddess.

Meanwhile, Oberon, king of the fairies, and his queen Titania have come to the forest near Athens. Titania tells Oberon that she plans to stay there until she  attend Theseus and Hippolyta’s wedding. Titania refuses to give her Indian boy to Oberon for use as his knight. Oberon is angry and plans to punish Titania’s disobedience, so he calls for the mischievous Puck (Robin Goodfellow) to help him apply a magical poison from a flower which when applied to a person’s eyelids while sleeping makes the victim fall in love with the first living thing seen upon awakening. He instructs Puck to retrieve the flower so that he can make Titania fall in love with the first thing she sees when awaking from sleep, which he thinks will be an animal of the forest.

Everything is unusual and full of magic. But the readers or audience of A Midsummer Night’s Dream notice with surprise that it’s still the same world in which they live, and that they can experience things similar to the characters’ – in a dream or even in reality…

The most popular Shakespeare’s quotes

Some quotes from William’s plays.

All the world’s a stage,
And all the men and women merely players;
They have their exits and their entrances,
And one man in his time plays many parts,
His acts being seven ages.

Characters in As You Like It often see themselves as actors and the audience should think about itself as actors, too. Jacques suggests that the world is a “wide and universal theater”.

To-morrow, and to-morrow, and to-morrow,
Creeps in this petty pace from day to day,
To the last syllable of recorded time;
And all our yesterdays have lighted fools
The way to dusty death. Out, out, brief candle!
Life’s but a walking shadow, a poor player,
That struts and frets his hour upon the stage,
And then is heard no more. It is a tale
Told by an idiot, full of sound and fury,
Signifying nothing.

Death seems to Macbeth to be the last act of an idiot’s play, full of melodrama, but without any meaning.

To be, or not to be, that is the question

Hamlet wonders if he should listen to his father’s  ghost and kill Claudius, which – for Hamlet – means killing himself in some way, or doesn’t do it and live with knowledge about the secrets of Old Hamlet’s death.

Brutus, a friend of Caesar, has joined the conspirators in the assassination.

Hamlet kills Polonius, whom he mistakes for the Claudius hiding in Gertrude’s room.

O Romeo, Romeo, wherefore art thou Romeo?
Deny thy father and refuse thy name;
Or if thou wilt not, be but sworn my love
And I’ll no longer be a Capulet.

Romeo is a Montague while  Juliet is a Capulet, and the Montagues and Capulets have a bloody history of killing one another. Juliet has invention that family identity can change along with one’s name.

O happy dagger!
This is thy sheath; there rust, and let me die.

Juliet awakes and finds Romeo’s dead. She wants to die, too. She kisses Romeo’s lips in hope the poison that has just killed her lover will kill her but she doesn’t die. Finally, she finds Romeo’s dagger and commits suicide. 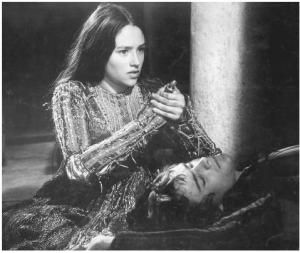 I am dying, Egypt, dying.

Mark Antony says that to Cleopatra, the Queen of Egypt, while he’s dying upon his own sword.

Sigh no more, ladies, sigh no more,
Men were deceivers ever,
One foot in sea, and one on shore,
To one thing constant never.
Then sigh not so, but let them go,
And be you blithe and bonny,
Converting all your sounds of woe
Into hey nonny nonny.

Much Ado About Nothing, Balthasar

Balthasar sings that because men will never change their ways, women should accept them as they are.

O, be some other name!/What’s in a name? That which we call a rose/By any other word would smell as sweet…

Shakespeare’s most popular and beloved tragedy was officially documented in 1597. Everybody knows this story of cursed lovers Romeo and Juliet so I’ll focus on play’s sources and adaptations.

William Shakespeare based the story on The Tragicall Historye of Romeus and Juliet, a narrative poem by Arthur Brooke. But earlier the names Montagues and Capulets appeared in Dante’s Divine Comedy. Romeo and Juliet tale turn up in Masuccio Salernitano’s Il Novellino published in 1476 but they are named Mariotto and Gianozza. Luigi da Porto adapted the story of Romeo and Giulietta as well. He introduced some new characters, like Mercutio, Tybalt and Paris. Da Porto presents his tale as historically true. Later, Matteo Bandello published his version of Giulietta and Romeo, in which he introduced Benvolio and Nurse.

Roméo et Juliette, de la Haine à l’Amour is a French musical which premiered in 2001 in Paris. Since then it has been performed in many countries and has been translated into several languages. Music and lyrics by Gerard Presgurvic.

Plot of the musical is similar to the original play but there are some new characters, like Death or Poete. There are 19 songs in Act 1 and 18 songs in Act 2. The most popular song is Les Rois du monde (,,Kings of the world”). I personally also love Les Beaux, les Laids  and Comment lui dire.

The story of Romeo and Juliet was used in many works, for example in The Master of Verona by David Blixt, or Romeo + Juliet, a movie directed  by Baz Luhrmann.

Comedies: The Taming of the Shrew

Think’st thou, Hortensio, though her father be very rich, any man is so very a fool to be married to hell?…

The comedy The Taming of the Shrew is Shakespeare’s most controversial play about marriage. For the first time, it was staged by the Lord Chamberlain’s Men on 1594 and it was published in the First Folio.

Petruchio – a gentleman from Verona, who is looking for a rich wife,

Baptista Minola – a lord of Padua

A widow – she’s in love with Hortensio.

Katherina is very rich, very beautiful and talented girl, a daughter of the Lord of Padua. She has only one fault – she’s a terrible shrew, so any man wants to marry her!  On the other hand, many gentlemen ask for Bianca’s hand but Baptista, her father, promised that Bianca will not marry until a husband is found for his other daughter, Kate. Meanwhile, the newcomers arrive to Padua: a young adventurer Lucentio and his servant Tranio. Lucentio meets Bianca and falls in love with her. Lucentio asks Tranio to pretend to be him while he disguises himself as a Latin tutor named Cambio, so that he can woo Bianca. The plan works and Bianca returns his affection. In the meantime, Petruchio comes from Verona in order to visit his friend Hortensio (who is Bianca’s suitor). Petruchio tells Hortensio that he’s looking for a rich wife, no matter how she looks or behaves, and he agrees to marry Katherina. Petruchio decides to tame the shrew and he successes.

Say that she frown, I’ll say she looks as clear/As morning roses newly washed with dew…

In the end, Kate changes. She’s a sweet, lovely girl now. Did Petruchio’s ‘torture’ and determination take effect or was it  just love…?

A film based on Shakespeare comedy with staring Elizabeth Taylor as Kate and Richard Burton as Petruchio became a hit. The film was directed by Franco Zeffirelli.

William Shakespeare was born in 1564, in Stratford-upon-Avon, England.  He is probably the greatest English writer. At the age of 18 he married Anne Hathaway, with whom he had children: Susanna and the twins Hamnet and Judith. He left them in 1588 and moved to London, where he became an actor and playwriter. William involved with Lord Chamberlain’s Men in 1594 . The theatrical company was mostly performing at the Globe theatre. They  have  won quickly Queen Elizabeth and king James’ favour. Shakespeare died in 23 April 1616, perhaps of a fever. His epitaph says:

Good friend, for Jesus’ sake forbeare
To dig the dust enclosed here.
Blessed be the man that spares these stones,
And cursed be he that moves my bones.

Shakespeare’s surviving works consist of 39 plays, 4 narrative poems, the sonnets and other poetry. 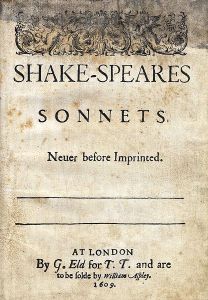 Hi, I’m Lena. It’s my blog about William Shakespeare and the world of theatre and actors. It’s also my school project…